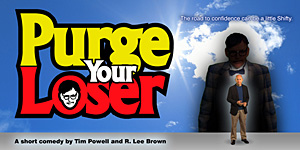 Mock Poster for Purge Your Loser

Purge Your Loser is an office comedy about how to be the best person you can be – even if that person is someone else. Oh sure, there are elements of New Age personal motivation and how you don’t really need to be someone else, because the perfect you is already inside you… if you believe that sort of thing. After all, this is a comedy, not a self-help film. Unless you WANT to help support a self-help film in which case that’s EXACTLY what this is.

See how easy that is?

Purge Your Loser is intended for an approximately 20 minute run time and will be shot in the Los Angeles area. Upon completion, it will be released online, via High Definition Blu-Ray, and submitted to a long list of Film Festivals and Competitions.

Edited down from a longer script into short film length, Purge Your Loser could easily become a full-length motion picture or translate into a web series OR — if the gods smile — an actual cable or TV series. Crazier, more magical things have happened. I mean – the Kardashians got famous?!? How many genies had to get rubbed off for THAT to happen? Wait, I meant genie LAMPS. How many Genie LAMPS got rubbed. Yeah, that’s what I meant.

Going in, only lead character Victor “Vic” Calvin, the confident executive with a following of loyal clients and wistful ladies, has been cast; he’ll be played by actor/producer Tim Powell. Once we’ve reached our target crowd-sourcing goal, we’ll be able to hold casting for devious rival Cash Dempsey, shy receptionist Jenny Book, iron-fisted executive Dana Masters, mono-toned, mega-wealthy client Larry Borman and the other skewed, off-beat characters in the script.

Speaking of the script, here’s a sample page so you’ll get a better idea of the style of comedy we’re going for. 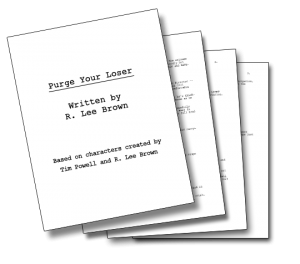